2018 proved to be an important year for UK gambling regulation. While UK licensed gambling operators have been subject to strict regulatory standards since the Gambling Commission was set up under the Gambling Act 2005, last year saw a number of changes to gambling regulation that will impact both land-based and remote gambling operators, including sports betting businesses, in the future.

With 2,820 UKGC licensed gambling operators in 2018, these changes have had and will continue to have, a widespread impact across the country. New regulation has been introduced in a bid to increase consumer protection and ensure that operators are making gambling as safe and fair as possible. But why were these changes introduced, and what did they look like? From changing advertising laws to tax increases, Casino Genius takes a closer look at the key changes to the UK’s gambling regulation in 2018 and what this means for gambling firms in the future.

Why were these changes made?

The ultimate aim of any change to UK gambling regulation is to support the Gambling Commission’s broader mission to ensure that gambling is fair and safe for everyone involved. With evidence that consumers weren’t being treated fairly by gambling operators, it became apparent that public trust in gambling was on the decline. On top of this, these changes were implemented in a bid to address serious failings regarding compliance with UK consumer law and advertising codes, as well as the protection of children and other vulnerable people from the potential dangers of gambling. It’s for these reasons that there has been widespread support for regulatory changes, not only from consumers and regulators but even from those within the gambling sector.

Changes to UK Gambling Regulation in 2018

Tighter restrictions on the advertisement of gambling promotions

First announced by the Committee of Advertising Practice (CAP) in February 2018 and implemented in April 2018, tighter gambling advertising standards mean that:

These new standards are monitored by the Advertising Standards Authority (ASA), though the Gambling Commission will also consider these standards when monitoring licensees. According to Ian Angus, Programme Director for Consumer Protection at UKGC, these new standards will help consumers “make informed choices about how and when they gamble and not feel pressured into making decisions that could cause them harm.” Angus also says that these changes were introduced to combat the problem that “offers were… misleading and customers didn’t have easy and ready access to understandable terms and conditions.”

Introduced on 31st October 2018, the Gambling Commission changed rules in its licensing conditions and codes of practice (LCCP) so that licensees:

Towards the end of the year, the Remote Gambling Association (RGA) struck a deal that called for a whistle-to-whistle ban on gambling advertisements during televised sports events, supported by operators such as Bet365, Ladbrokes and PaddyPower. The Industry Group for Responsible Gambling (IGRG) confirmed that the change will come into place in 2019. Under the changes, it will be forbidden to broadcast TV gambling ads five minutes before or after a sporting event is broadcast, if it begins before 9 pm, including pre-watershed reruns and highlights shows.

Despite the exemption of horse racing and greyhound racing events, as well as perimeter gambling ads and players’ shirt sponsorships, the ban has been deemed a “welcome move” by Jeremy Wright, Secretary of State for Digital, Culture, Media and Sport. The change has been a long time coming, with reports that the ASA received 115 complaints after 90 minutes of gambling ads were broadcast during the 2018 World Cup.

The UK isn’t the first of European countries to restrict gambling advertisements. Gambling ads in Italy were banned from TV, radio and internet, from 1st January 2019, though operators with existing agreements will be given until 30th June to end the contracts. In addition to this, the Irish President has voiced his concerns and called for a ban on gambling advertising in the country, but there is yet to be any progress on creating legislation.

In addition to this, there were a new set of standards for ADR (alternative dispute resolutions) providers. Under these new standards, ADR providers must:

This regulation comes as part of a broader mission to put consumers first and means that complaints will be dealt with more swiftly.

Last year also saw changes to maximum stakes at fixed odds betting terminals (FOBTs), with the maximum bet reduced from £100 to £2. With a staggering £1.82 bn lost on these betting machines in 2016, reducing this maximum bet limit will help to protect those most vulnerable, from problem gambling. According to former Minister for Sport and Civil Society, Tracey Crouch, who resigned over this issue, “reducing FOBT stakes to £2 [allows us to] help stop extreme losses by those who can least afford it.”

This new regulation was originally due to come into play in October 2019, but due to increasing pressure on the government, the change in law has been brought forward to April 2019. Crouch went on to say that, “while we want a healthy gambling industry that contributes to the economy, we also need one that does all it can to protect players.” This recognition demonstrates that having a healthy gambling industry in the UK is about so much more than maximising profits for operators, and involves protecting players as much as possible.

The government also announced an increase in the tax remote gambling companies would pay in the net financial year. Remote gaming duty (RGD) will increase from 15% to 21% from April 2019, and is set to offset the financial loss that will occur as a result of lower FOBT stakes. This increase in RGD will affect companies that allow gaming over the internet, telephone, by television, radio or other electronic communications. The 21% tax rate will apply to any profits made on or after 1st October 2019.

The 6% tax increase is predicted to make £130 million for the Treasury in 2019-2020, and almost double over the following year, according to the 2018 Budget Policy Costings. 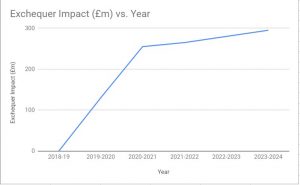 So what do these changes mean?

The main aim of the changes to UK gambling regulation is to provide consumers with increased protection and ensure they’re treated fairly by gambling operators. Thanks to the changes:

The UKGC and ASA did not delay in taking action against operators that failed to meet new standards. In 2018, a number of gambling firms faced consequences for shortcomings, with nearly £14 million having been paid in fines as of November 2018 and a number of firms under investigation. Neil MacArthur, Gambling Commission CEO, says “It is not enough to have policies and procedures in place. Everyone in a gambling business must understand its policies and procedures and take responsibility for properly applying them.”

Whilst some of these changes were implemented earlier in the year, and have already meant that a number of gambling operators have paid the price for shortcomings, other changes are yet to come into action. This means there’s still time for further changes to take place within the UK gambling industry, especially in terms of finances. One thing that is for certain, however, is that the Gambling Commission will continue throughout 2019 and beyond to “respond to emerging risks and issues in a way that balances consumer choice and enjoyment with the
risks associated with gambling, and the impact on wider society.”